By on February 25, 2016 in Archive Highlights, Songmine, Songwriting Business 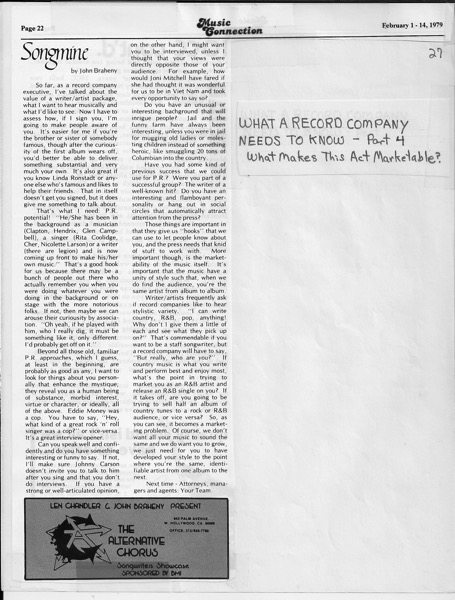 Songmine: What a Record Company Needs to Know – Part 4: What Makes This Act Marketable? by John Braheny

Songmine by John Braheny
What a Record Company Needs to Know – Part 4: What Makes This Act Marketable?

So far, as a record company executive, I’ve talked about the value of a writer/artist package, what I want to hear musically and what I’d like to see. Now I have to assess how, if I sign you, I’m going to make people aware of you. It’s easier for me if you’re the brother or sister of somebody famous, though after the curious-ity of the first album wears off, you’d better be able to deliver something substantial and very much your own. It’s also great if you know Linda Ronstadt or any-one else who’s famous and likes to help their friends. That in itself doesn’t get you signed, but it does give me something to talk about.

That’s what I need: P.R. potential! “He/She ‘has been in the background as a musician (Clapton, Hendrix, Glen Camp-bell), a singer (Rita Coolidge, Cher, Nicolette Larson) or a writer (there are legion) and is now coming up front to make his/her own music.” That’s a good hook for us because there may be a bunch of people out there who actually remember you when you were doing whatever you were doing in the background or on stage with the more notorious folks. If not, then maybe we can arouse their curiousity by associa-tion. “Oh yeah, if he played with him, who I really dig, it must be something like it, only different. I’d probably get off on it.”

Beyond all those old, familiar P.R. approaches, which I guess, at least in the beginning, are probably as good as any, I want to look for things about you personally that enhance the mystique; they reveal you as a human being of substance, morbid interest, virtue or character, or ideally, all of the above. Eddie Money was a cop. You have to say, “Hey, what kind of a great rock ‘n’ roll singer was a cop?” or vice-versa. It’s a great interview opener.

Beyond all those old, familiar P.R. approaches, which I guess, at least in the beginning, are probably as good as any, I want to look for things about you personally that enhance the mystique; they reveal you as a human being of substance, morbid interest, virtue or character, or ideally, all of the above.

Can you speak well and confidently and do you have something interesting or funny to say. If not, I’ll make sure Johnny Carson doesn’t invite you to talk to him after you sing and that you don’t do interviews. If you have a strong or well-articulated opinion, on the other hand, I might want you to be interviewed, unless I thought that your views were directly opposite those of your audience. For example, how would Joni Mitchell have fared if she had thought it was wonderful for us to be in Viet Nam and took every opportunity to say so?

Do you have an unusual or interesting bachground that will inrigue people? Jail and the funny farm have always been interesting, unless you were in jail for mugging old ladies or moles-ting children instead of something heroic, like smuggling 20 tons of Columbian into the country.

Have you had some kind of previous success that we could use for P.R.? Were you part of a successful group? The writer of a well-known hit? Do you have an interesting and flamboyant per-sonality or hang out in social circles that automatically attract attention from the press?

Those things are important in that they give us “hooks” that we can use to let people know about you, and the press needs that knid of stuff to work with. More important though, is the market-ability of the music itself. It’s important that the music have a unity of style such that, when we do find the audience, you’re the same artist from album to album.

Writer/artists frequently ask if record companies like to hear stylistic variety. “I can write country, R&B, pop, anything! Why don’t I give them a little of each and see what they pick up on?” That’s commendable if you want to be a staff songwriter, but a record company will have to say, “Rut really, who are you?” If country music is what you write and perform best and enjoy most, what’s the point in trying to market you as an R&B artist and release an R&B single on you? If it takes off, are you going to be trying to sell half an album of country tunes to a rock or R&B audience, or vice versa? So, as you can see, it becomes a market-ing problem. Of course, we don’t want all your music to sound the same and we do want you to grow, we just need for you to have developed your style to the point where you’re the same, identi-fiable artist from one album to the next.

Next time – Attorneys, managers and agents: Your Team.