By on June 2, 2016 in Archive Highlights, Songmine, Songwriting Craft 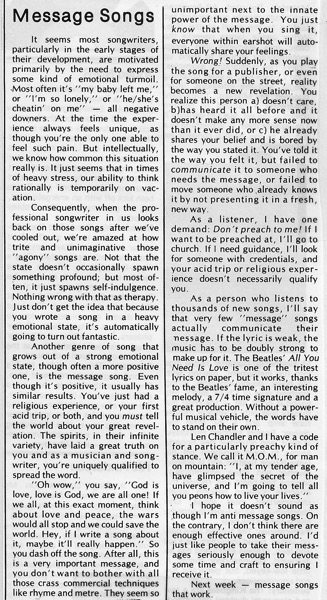 It seems most songwriters, particularly in the early stages of their development, are motivated primarily by the need to express some kind of emotional turmoil. Most often it’s “my baby left me,” or “I’m so lonely,” or “he/she’s cheatin’ on me” — all negative downers. At the time the exper-ience always feels unique, as though you’re the only one able to feel such pain. But intellectually, we know how common this situation really is. It just seems that in times of heavy stress, our ability to think rationally is temporarily on vac-ation.

Consequently, when the pro-fessional songwriter in us looks back on those songs after we’ve cooled out, we’re amazed at how trite and unimaginative those “agony” songs are. Not that the state doesn’t occasionally spawn something profound; but most of-ten, it just spawns self-indulgence. Nothing wrong with that as therapy. J ust don’t get the idea that because you wrote a song in a heavy emotional state, it’s automatically going to turn out fantastic.

Another genre of song that grows out of a strong emotional state, though often a more positive one, is the message song. Even though it’s positive, it usually has similar results. You’ve just had a religious experience, or your first acid trip, or both, and you must tell the world about your great revel-ation. The spirits, in their infinite variety, have laid a great truth on you and as a musician and song-writer, you’re uniquely qualified to spread the word.

“Oh wow,” you say, “God is love, love is God, we are all one! If we all, at this exact moment, think about love and peace, the wars would all stop and we could save the world. Hey, if I write a song about it, maybe it’ll really happen.” So you dash off the song. After all, this is a very important message, and you don’t want to bother with all those crass commercial techniques like rhyme and metre. They seem so unimportant next to the innate power of the message. You just know that when you sing it, everyone within earshot will auto-matically share your feelings.

Wrong! Suddenly, as you play the song for a publisher, or even for someone on the street, reality becomes a new revelation. You realize this person a) doesn’t care, b)has heard it all before and it doesn’t make any more sense now than it ever did, or c) he already shares your belief and is bored by the way you stated it. You’ve told it the way you felt it, but failed to communicate it to someone who needs the message, or failed to move someone who .already knows it by not presenting it in a fresh, new way.

As a listener, I have one demand: Don’t preach to me! If I want to be preached at, I’ll go to church. If I need guidance, I’ll look for someone with credentials, and your acid trip or religious exper-ience doesn’t necessarily qualify you.

As a person who listens to thousands of new songs, I’ll say that very few “message” songs actually communicate their message. If the lyric is weak, the music has to be doubly strong to make up for it. The Beatles’ All You Need Is Love is one of the tritest lyrics on paper, but it works, thanks to the Beatles’ fame, an interesting melody, a 7/4 time signature and a great production. Without a power-ful musical vehicle, the words have to stand on their own.

Len Chandler and I have a code for a particularly preachy kind of stance. We call it M.O.M., for man on mountain: “I, at my tender age, have glimpsed the secret of the universe, and I’m going to tell all you peons how to live your lives.”

I hope it doesn’t sound as _though I’m anti message songs. On the contrary, I don’t think there are enough effective ones around. I’d just like people to take their mess-ages seriously enough to devote some time and craft to ensuring 1 receive it.

Next week — message songs that work.