By on December 7, 2015 in Archive Highlights, Opinions, Songmine, Songwriting Business 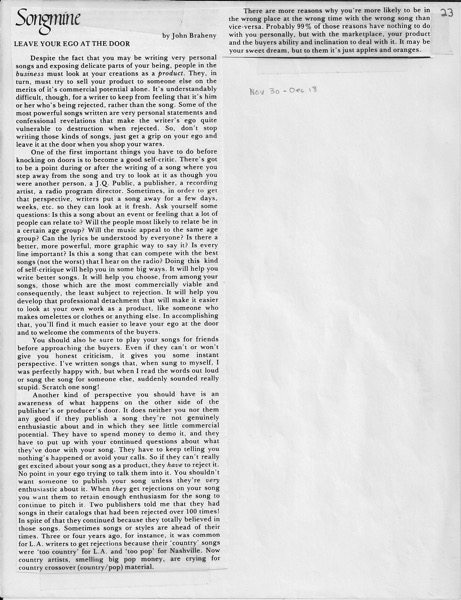 LEAVE YOUR EGO AT THE DOOR

Despite the fact that you may be writing very personal songs and exposing delicate parts of your being, people in the business must look at your creations as a product. They, in turn, must try to sell your product to someone else on the merits of it’s commercial potential alone. It’s understandably difficult, though, for a writer to keep from feeling that it’s him or her who’s being rejected, rather than the song. Some of the most powerful songs written are very personal statements and confessional revelations that make the writer’s ego quite vulnerable to destruction when rejected. So, don’t stop writing those kinds of songs, just get a grip on your ego and leave it at the door when you shop your wares.

One of the first important things you have to do before knocking on doors is to become a good self-critic. There’s got to be a point during or after the writing of a song where you step away from the song and try to look at it as though you were another person, a J.Q. Public, a publisher, a recording artist, a radio program director. Sometimes, in order to get that perspective, writers put a song away for a few days, weeks, etc. so they can look at it fresh. Ask yourself some questions: Is this a song about an event or feeling that a lot of people can relate to? Will the people most likely to relate be in a certain age group? Will the music appeal to the same age group? Can the lyrics be understood by everyone? Is there a better, more powerful, more graphic way to say it? Is every line important? Is this a song that can compete with the best songs (not the worst) that I hear on the radio? Doing this kind of self-critique will help you in some big ways. It will help you write better songs. It will help you choose, from among your songs, those which are the most commercially viable and consequently, the least subject to rejection. It will help you develop that professional detachment that will make it easier to look at your own work as a product, like someone who makes omelettes or clothes or anything else. In accomplishing that, you’ll find it much easier to leave your ego at the door and to welcome the comments of the buyers.

You should also be sure to play your songs for friends before approaching the buyers. Even if they can’t or won’t give you honest criticism, it gives you some instant perspective. I’ve written songs that, when sung to myself, I was perfectly happy with, but when I read the words out loud or song the song for someone else, suddenly sounded really stupid. Scratch one song!

Another kind of perspective you should have is an awareness of what happens on the other side of the publisher’s or producer’s door. It does neither you nor them any good if they publish a song they’re not genuinely enthusiastic about and in which they see little commercial potential. They have to spend money to demo it, and they have to put up with your Continued questions about what they’ve done with your song. They have to keep telling you nothing’s happened or avoid your calls. So if they can’t really get excited about your song as a product, they have to reject it. No point in your ego trying to talk them into it. You shouldn’t want someone to publish your song unless they’re very enthusiastic about it. When they get rejections on your song you want them to retain enough enthusiasm for the song to continue to pitch it. Two publishers told me that they had songs in their catalogs that had been rejected over 100 times! In spite of that they continued because they totally believed in those songs. Sometimes songs or styles are ahead of their times. Three or four years ago, for instance, it was common for L.A. writers to get rejections because their ‘country’ songs were ‘too country’ for L.A. and ‘too pop’ for Nashville. Now country artists, smelling big pop money, are crying for country crossover (country/pop) material.

There are more reasons why you’re more likely to be in the wrong place at the wrong time with the wrong song than vice-versa. Probably 99% of those reasons have nothing to do with you personally, but with the marketplace, your product and the buyers ability and inclination to deal with it. It may be your sweet dream, but to them it’s just apples and oranges.