By on January 21, 2016 in Archive Highlights, Opinions, Songmine, Songwriting Business 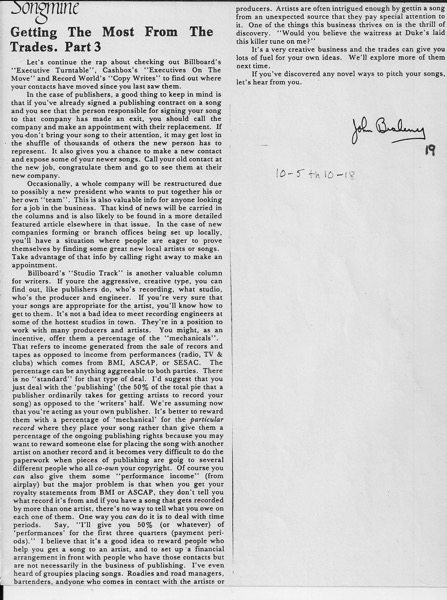 Accession Number: C000000137-007 Document/Digital File, “Songmine: Getting the Most from the Trades Part 3 by John Braheny, OCR converted text under same Accession Number

Songmine: Getting The Most From The Trades. Part 3 by John Braheny

Let’s continue the rap about checking out Billboard’s “Executive Turntable”, Cashbox’s “Executives On The Move” and Record World’s “Copy Writes” to find out where your contacts have moved since you last saw them.

In the case of publishers, a good thing to keep in mind is that if you’ve already signed a publishing contract on a song and you see that the person responsible for signing your song to that company has made an exit, you should call the company and make an appointment with their replacement. If you-don’t bring your song to their attention, it may get lost in the shuffle of thousands of others the new person has to represent. It also gives you a chance to make a new contact and expose some of your newer songs. Call your old contact at the new job, congratulate them and go to see them at their new company.

Occasionally, a whole company will be restructured due to possibly a new president who wants to put together his or her own “team”. This is also valuable info for anyone looking for a job in the business. That kind of news will be carried in the columns and is also likely to be found in a more detailed featured article elsewhere in that issue. In the case of new companies forming or branch offices being set up locally, you’ll have a situation where people are eager to prove themselves by finding some great new local artists or songs. Take advantage of that info by calling right away to make an appointment.

Billboard’s “Studio Track” is another valuable column for writers. If youre the aggressive, creative type, you can find out, like publishers do, who’s recording, what studio, who’s the producer and engineer. If you’re very sure that your songs are appropriate for the artist, you’ll know how to get to them. It’s not a bad idea to meet recording engineers at some of the hottest studios in town. They’re in a position to work with many producers and artists. You might, as an incentive, offer them a percentage of the “mechanicals”. That refers to income generated from the sale of recors and tapes as opposed to income from performances (radio, TV & clubs) which comes from BMI, ASCAP, or SESAC. The percentage can be anything aggreeable to both parties. There is no “standard” for that type of deal. I’d suggest that you just deal with the ‘publishing’ (the 50% of the total pie that a publisher ordinarily takes for getting artists to record your song) as opposed to the ‘writers’ half. We’re assuming now that you’re acting as your own publisher. It’s better to reward them with a percentage of ‘mechanical’ for the particular record where they place your song rather than give them a percentage of the ongoing publishing rights because you may want to reward someone else for placing the song with another artist on another record and it becomes very difficult to do the paperwork when pieces of publishing are goig to several different people who all co-own your copyright. Of course you can also give them some “performance income” (from airplay) but the major problem is that when you get your royalty statements from BMI or ASCAP, they don’t tell you what record it’s from and if you have a song that gets recorded by more than one artist, there’s no way to tell what you owe on each one of them. One way you can do it is to deal with time periods. Say, “I’ll give you 50% (or whatever) of `performances’ for the first three quarters (payment peri-ods).” I believe that it’s a good idea to reward people who help you get a song to an artist, and to set up ‘a financial arrangement in front with people who have those contacts but are not necessarily in the business of publishing. I’ve even heard of groupies placing songs. Roadies and road managers, bartenders, andyone who comes in contact with the artists or
producers. Artists are often intrigued enough by gettin a song from an unexpected source that they pay special attention to it. One of the things this business thrives on is the thrill of discovery. “Would you believe the waitress at Duke’s laid this killer tune on me?”

It’s a very creative business and the trades can give you lots of fuel for your own ideas. We’ll explore more of them next time.

If you’ve discovered any novel ways to pitch your songs, let’s hear from you.