By on January 14, 2016 in Archive Highlights, Opinions, Songmine, Songwriting Business 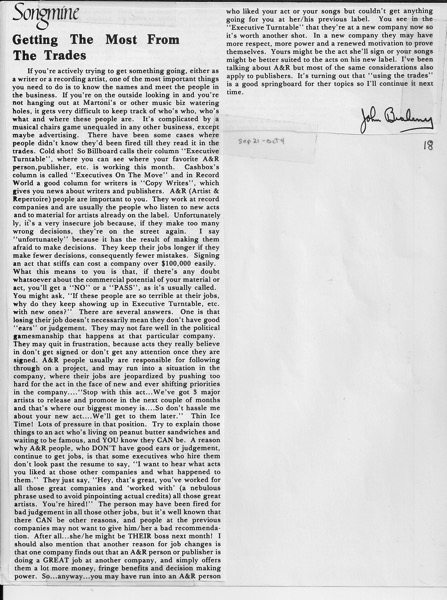 Accession Number: C000000137-006 Document/Digital File, “Songmine: Getting the Most from the Trades by John Braheny, OCR converted text under same Accession Number

If you’re actively trying to get something going, either as a writer or a recording artist, one of the most important things you need to do is to know the names and meet the people in the business. If you’re on the outside looking in and you’re not hanging out at Martoni’s or other music biz watering holes, it gets very difficult to keep track of who’s who, who’s what and where these people are. It’s complicated by a musical chairs game unequaled in any other business, except maybe advertising. There have been some cases where people didn’t know they’d been fired till they read it in the trades. Cold shot! So Billboard calls their column “Executive Turntable”, where you can see where your favorite A&R person,publisher, etc. is working this month. Cashbox’s column is called “Executives On The Move” and in Record World a good column for writers is “Copy Writes”, which gives you news about writers and publishers. A&R (Artist & Repertoire) people are important to you. They work at record companies and are usually the people who listen to new acts and to material for artists already on the label. Unfortunately ly, it’s a very insecure job because, if they make too many wrong decisions, they’re on the street again. I say “unfortunately” because it has the result of making them afraid to make decisions. They keep their jobs longer if they make fewer decisions, consequently fewer mistakes. Signing an act that stiffs can cost a company over $100,000 easily. What this means to you is that, if there’s any doubt whatsoever about the commercial potential of your material or act, you’ll get a “NO” or a “PASS”, as it’s usually called. You might ask, “If these people are so terrible at their jobs, why do they keep showing up in Executive Turntable, etc. with new ones?” There are several answers. One is that losing their job doesn’t necessarily mean they don’t have good “ears” or judgement. They may not fare well in the political gamesmanship that happens at that particular company. They may quit in frustration, because acts they really believe in don’t get signed or don’t get any attention once they are signed. A&R people usually are responsible for following through on a project, and may run into a situation in the company, where their jobs are jeopardized by pushing too hard for the act in the face of new and ever shifting priorities in the company….”Stop with this act.. .We’ve got 3 major artists to release and promote in the next couple of months and that’s where our biggest money is….So don’t hassle me about your new act….We’ll get to them later.” Thin Ice Time! Lots of pressure in that position. Try to explain those things to an act who’s living on peanut butter sandwiches and waiting to be famous, and YOU know they CAN be. A reason why A&R people, who DON’T have good ears or judgement, continue to get jobs, is that some executives who hire them don’t look past the resume to say, “I want to hear what acts you liked at those other companies and what happened to them.” They just say, “Hey, that’s great, you’ve worked for all those great companies and ‘worked with’ (a nebulous phrase used to avoid pinpointing actual credits) all those great artists. You’re hired!” The person may have been fired for bad judgement in all those other jobs, but it’s well known that there CAN be other reasons, and people at the previous companies may not want to give him/her a bad recommenda-tion. After all.. .she/he might be THEIR boss next month! I should also mention that another reason for job changes is that one company finds out that an A&R person or publisher is doing a GREAT job at another company, and simply offers them a lot more money, fringe benefits and decision making power. So…anyway…you may have run into an A&R person who liked your act or your songs but couldn’t get anything going for you at her/his previous label. You see in the “Executive Turntable” that they’re at a new company now so it’s worth another shot. In a new company they may have more respect, more power and a renewed motivation to prove themselves. Yours might be the act she’ll sign or your songs might be better suited to the acts on his new label. I’ve been talking about A&R but most of the same considerations also apply to publishers. It’s turning out that “using the trades” is a good springboard for ther topics so I’ll continue it next time.