By on October 26, 2015 in Archive Highlights, Opinions, Songmine, Songwriting Business 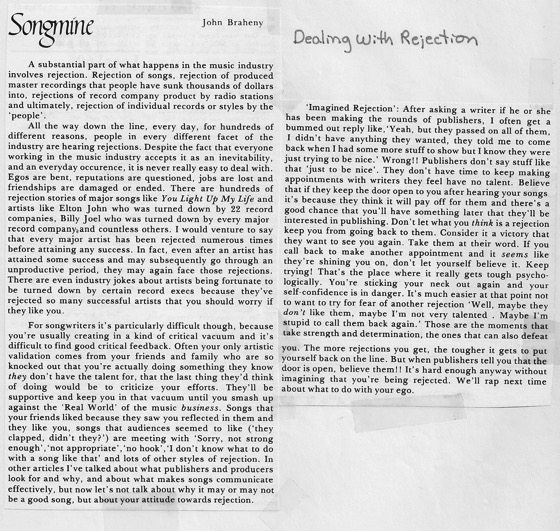 A substantial part of what happens in the music industry involves rejection. Rejection of songs, rejection of produced master recordings that people have sunk thousands of dollars into, rejections of record company product by radio stations and ultimately, rejection of individual records or styles by the `people’ .

All the way down the line, every day, for hundreds of different reasons, people in every different facet of the industry are hearing rejections. Despite the fact that everyone working in the music industry accepts it as an inevitability, and an everyday occurence, it is never really easy to deal with. Egos are bent, reputations are questioned, jobs are lost and friendships are damaged or ended. There are hundreds of rejection stories of major songs like You Light Up My Life and artists like Elton John who was turned down by 22 record companies, Billy Joel who was turned down by every major record company,and countless others. I would venture to say that every major artist has been rejected numerous times before attaining any success. In fact, even after an artist has attained some success and may subsequently go through an unproductive period, they may again face those rejections. There are even industry jokes about artists being fortunate to be turned down by certain record execs because they’ve rejected so many successful artists that you should worry if they like you.

For songwriters it’s particularly difficult though, because you’re usually creating in a kind of critical vacuum and it’s difficult to find good critical feedback. Often your only artistic validation comes from your friends and family who are so knocked out that you’re actually doing something they know they don’t have the talent for, that the last thing they’d think of doing would be to criticize your efforts. They’ll be supportive and keep you in that vacuum until you smash up against the ‘Real World’ of the music business. Songs that your friends liked because they saw you reflected in them and they like you, songs that audiences seemed to like (`they clapped, didn’t they?’) are meeting with ‘Sorry, not strong enough’ , ‘not appropriate’ , ‘no hook’ , don’t know what to do with a song like that’ and lots of other styles of rejection. In other articles I’ve talked about what publishers and producers look for and why, and about what makes songs communicate effectively, but now let’s not talk about why it may or may not be a good song, but about your attitude towards rejection.

`Imagined Rejection’: After asking a writer if he or she has been making the rounds of publishers, I often get a bummed out reply like, Yeah, but they passed on all of them, I didn’t have anything they wanted, they told me to come back when I had some more stuff to show but I know they were just trying to be nice.’ Wrong!! Publishers don’t say stuff like that ‘just to be nice’. They don’t have time to keep making appointments with writers they feel have no talent. Believe that if they keep the door open to you after hearing your songs it’s because they think it will pay off for them and there’s a good chance that you’ll have something later that they’ll be interested in publishing. Don’t let what you think is a rejection keep you from going back to them. Consider it a victory that they want to see you again. Take them at their word. If you call back to make another appointment and it seems like they’re shining you on, don’t let yourself believe it. Keep trying! That’s the place where it really gets tough psycho-logically. You’re sticking your neck out again and your self-confidence is in danger. It’s much easier at that point not to want to try for fear of another rejection ‘Well, maybe they don’t like them, maybe I’m not very talented . Maybe I’m stupid to call them back again.’ Those are the moments that take strength and determination, the ones that can also defeat you. The more rejections you get, the tougher it gets to put yourself back on the line. But when publishers tell you that the door is open, believe them!! It’s hard enough anyway without imagining that you’re being rejected. We’ll rap next time about what to do with your ego.