By on March 3, 2016 in Archive Highlights, Songmine, Songwriting Business 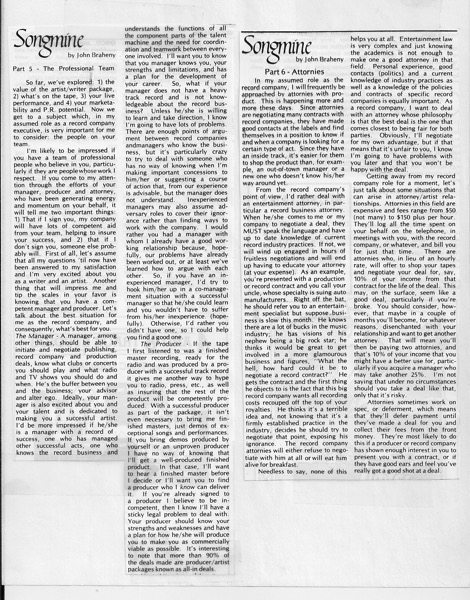 Songmine: What a Record Company Needs to Know – Part 5: The Professional Team by John Braheny

So far, we’ve explored: 1) the value of the artist/writer package, 2) what’s on the tape, 3) your live performance, and 4) your marketa-bility and P.R. potential. Now we get to a subject which, in my assumed role as a record company executive, is very important for me to consider: the people on your team.

I’m likely to be impressed if you have a team of professional people who believe in you, particu-larly if they are people whose work I respect. If you come to my atten-tion through the efforts of your manager, producer and attorney, who have been generating energy and momentum on your behalf, it will tell me two important things: 1) That if I sign you, my company will have lots of competent aid from your team, helping to insure your success, and 2) that if I don’t sign you, someone else prob-ably will. First of all, let’s assume that all my questions ’til now have been answered to my satisfaction and I’m very excited about you as a writer and an artist. Another thing that will impress me and tip the scales in your favor is knowing that you have a com-petent manager and producer. Let’s talk about the best situation for me as the record company, and consequently, what’s best for you. The Manager – A manager, among other things, should be able to initiate and negotiate publishing, record company and production deals, know what clubs or concerts you should play and what radio and TV shows you should do and when. He’s the buffer between you and the business; your advisor and alter ego. Ideally, your man-ager is also excited about you and your talent and is dedicated to making You a successful artist. I’d be more impressed if he/she is a manager with a record of success, one who has managed other successful acts, one who knows the record business and understands the functions of all the component parts of the talent machine and the need for coordin-ation and teamwork between every-one involved. I’ll want you to know that you manager knows you, your strengths and limitations, and has a plan for the development of you.r career. So, what if your manager does not have a heavy track record and is not know-ledgeable about the record bus-iness? Unless he/she is willing to learn and take direction, I know I’m going to have lots of problems. There are enough points of argu-ment between record companies andmanagers who know the busi-ness, but it’s particularly crazy to try to deal with someone who has no way of knowing when I’m making important concessions to him/her or suggesting a course of action that, from our experience is advisable, but the manager does not understand. Inexperienced managers may also assume ad-versary roles to cover their ignor-ance rather than finding ways to work with the company. I would rather you had a manager with whom I already have a good wor-king relationship because, hope-fully, our problems have already been worked out, or at least we’ve learned how to argue with each other. So, if you have an in-experienced manager, I’d try to hook him/her up in a co-manage-ment situation with a successful manager so that he/she could learn and you wouldn’t have to suffer from his/her inexperience. (hope-fully). Otherwise, I’d rather you didn’t have one, so I could help you find a good one.

The Producer – If the tape I first listened to was a finished master recording, ready for the radio and was produced by a pro-ducer with a successful track record it gives me another way to hype you to radio, press, etc., as well as insuring that the rest of the product will be competently pro-duced. With a successful producer as part of the package, it isn’t even necessary to bring me fin-ished masters, just demos of ex-ceptional songs and performances. If you bring demos produced by yourself or an unproven producer I have no way of knowing that I’ll get a well-produced finished product. In that case, I’ll want to hear a finished master before I decide or I’ll want you to find a producer who I know can deliver it. If you’re already signed to a producer I believe to be in-competent, then I know I’ll have a sticky legal problem to deal with. Your producer should know your strengths and weaknesses and have a plan for how he/she will produce you to make you as commercially viable as possible. It’s interesting to note that more than 90% of the deals made are producer/artist packages known as all-in deals.