By on February 4, 2016 in Opinions, Songmine, Songwriting Business 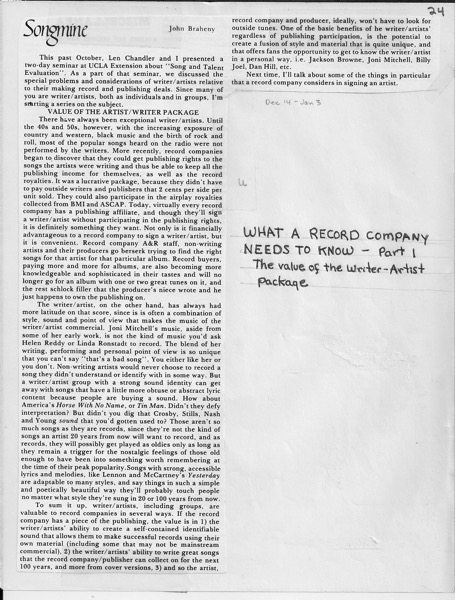 Songmine: What A Record Company Needs to Know: Part 1 by John Braheny

This past October, Len Chandler and I presented a two-day seminar at UCLA Extension about “Song and Talent Evaluation”. As a part of that seminar, we discussed the special problems and considerations of writer/artists relative to their making record and publishing deals. Since many of you are writer/artists, both as individuals and in groups, I’m sorting a series on the subject.

VALUE OF THE ARTIST/WRITER PACKAGE

There have always been exceptional writer/artists. Until the 40s and 50s, however, with the increasing exposure of country and western, black music and the birth of rock and roll, most of the popular songs heard on the radio were not performed by the writers. More recently, record companies began to. discover that they could get publishing rights to the songs the artists were writing and thus be able to keep all the publishing income for themselves, as well as the record royalties. It was a lucrative package, because they didn’t have to pay outside writers and publishers that 2 cents per side per unit sold. They could also participate in the airplay royalties collected from BMI and ASCAP. Today, virtually every record company has a publishing affiliate, and though they’ll sign a writer/artist without participating in the publishing rights, it is definitely something they want. Not only is it financially advantageous to a record company to sign a writer/artist, but it is convenient. Record company A&R staff, non-writing artists and their producers go berserk trying to find the right songs for that artist for that particular album. Record buyers, paying more and more for albums, are also becoming more knowledgeable and sophisticated in their tastes and will no longer go for an album with one or two great tunes on it, and the rest schlock filler that the producer’s niece wrote and he just happens to own the publishing on.

The writer/artist, on the other hand, has always had more latitude on that score, since is is often a combination of style, sound and point of view that makes the music of the writer/artist commercial. Joni Mitchell’s music, aside from some of her early work, is not the kind of music you’d ask Helen Reddy or Linda Ronstadt to record. The blend of her writing, performing and personal point of view is so unique that you can’t say “that’s a bad song”. You either like her or you don’t. Non-writing artists would never choose to record a song they didn’t understand or identify with in some way. But a writer/artist group with a strong sound identity can get away with songs that have a little more obtuse or abstract lyric content because people are buying a sound. How about America’s Horse With No Name, or Tin Man. Didn’t they defy interpretation? But didn’t you dig that Crosby, Stills, Nash and Young sound that you’d gotten used to? Those aren’t so much songs as they are records, since they’re not the kind of songs an artist 20 years from now will want to record, and as records, they will possibly get played as oldies only as long as they remain a trigger for the nostalgic feelings of those old enough to have been into something worth remembering at the time of their peak popularity.Songs with strong, accessible lyrics and melodies, like Lennon and McCartney’s Yesterday are adaptable to many styles, and say things in such a simple and poetically beautiful way they’ll probably touch people no matter what style they’re sung in 20 or 100 years from now.

To sum it up, writer/artists, including groups, are valuable to record companies in several ways. If the record company has a piece of the publishing, the value is in 1) the writer/artists’ ability to create a self-contained identifiable sound that allows them to make successful records using their own material (including some that may not be mainstream commercial), 2) the writer/artists’ ability to write great songs that the record company/publisher can collect on for the next 100 years, and more from cover versions, 3) and so the artist, record company and producer, ideally, won’t have to look for outside tunes. One of the basic benefits of he writer/artists’ regardless of publishing participation, is the potential to create a fusion of style and material that is quite unique, and that offers fans the opportunity to get to know the writer/artist in a personal way, i.e. Jackson Browne, Joni Mitchell, Billy Joel, Dan Hill, etc. Next time, I’ll talk about some of the things in particular that a record company considers in signing an artist.