By on April 14, 2016 in Archive Highlights, Songmine, Songwriting Craft 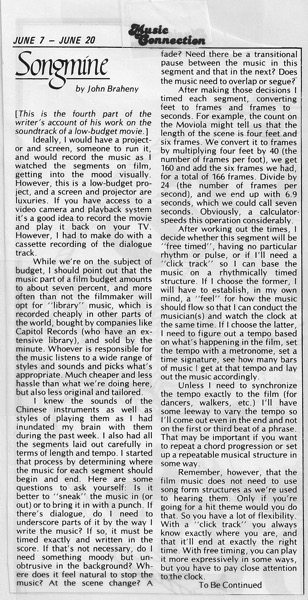 [This is the fourth part of the writer’s account of his work on the soundtrack of a low-budget movie.]

Ideally, I would have a project-or and screen, someone to run it, and would record the music as I watched the segments on film, getting into the mood visually. However, this is a low-budget pro-ject, and a screen and projector are luxuries. If you have access to a video camera and playback system it’s a good idea to record the movie and play it back on your TV. However, I had to make do with a cassette recording of the dialogue track.

While we’re on the subject of budget, I should point out that the music part of a film budget amounts to about seven percent, and more often than not the filmmaker will opt for “library” music, which is recorded cheaply in other parts of the world, bought by companies like Capitol Records (who have an ex-tensive library), and sold by the minute. Whoever is responsible for the music listens to a wide range of styles and sounds and picks what’s appropriate. Much cheaper and less hassle than what we’re doing here, but also less original and tailored.

I knew the sounds of the Chinese instruments as well as styles of playing them as I had inundated my brain with them during the past week. I also had all the segments laid out carefully in terms of length and tempo. I started that process by determining where the music for each segment should begin and end. Here are some questions to ask yourself: Is it better to “sneak” the music in (or out) or to bring it in with a punch. If there’s dialogue, do I need to underscore parts of it by the way I write the music? If so, it must be timed exactly and written in the score. If that’s not necessary, do I need something moody but un-obtrusive in the background? Wh-ere does it feel natural to stop the music? At the scene change? A fade? Need there be a transitional pause between the music in this segment and that in the next? Does the music need to overlap or segue?

After making those decisions I timed each segment, converting feet to frames and frames to seconds. For example, the count on the Moviola might tell us that the length of the scene is four feet and six frames. We convert it to frames by multiplying four feet by 40 (the number of frames per foot), we get 160 and add the six frames we had, for a total of 166 frames. Divide by 24 (the number of frames per second), and we end up with 6.9 seconds, which we could call seven seconds. Obviously, a calculator-speeds this operation considerably.
After working out the times, I decide whether this segment will be “free timed”, having no particular rhythm or pulse, or if I’ll need a “click track” so I can base the music on a rhythmically timed structure. If I choose the former, I will have to establish, in my own mind, a “feel” for how the music should flow so that I can conduct the musician(s) and watch the clock at the same time. If I choose the latter, I need to figure out a tempo based on what’s happening in the film, set the tempo with a metronome, set a time signature, see how many bars of music I get at that tempo and lay out the music accordingly. Unless I need to synchronize the tempo exactly to the film (for dancers, walkers, etc.) I’ll have some leeway to vary the tempo so I’ll come out even in the end and not on the first or third beat of a phrase. That may be important if you want to repeat a chord progression or set up a repeatable musical structure in some way.

Remember, however, that the film music does not need to use song form structures as we’re used to hearing them. Only if you’re going for a hit theme would you do that. So you have a lot of flexibility. With a “click track” you always know exactly where you are, and that it’ll end at exactly the right time. With free timing, you can play it more expressively in some ways, but you have to pay close attention to the clock.