By on April 21, 2016 in Archive Highlights, Songmine, Songwriting Craft 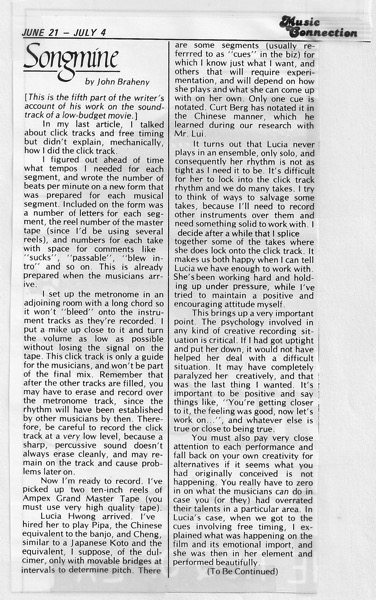 [This is the fifth part of the writer’s account of his work on the sound-track of a low-budget movie.]

In my last article, I talked about click tracks and free timing but didn’t explain, mechanically, how I did the click track.

I figured out ahead of time what tempos I needed for each segment, and wrote the number of beats per minute on a new form that was prepared for each musical segment. Included on the form was a number of letters for each seg-ment, the reel number of the master tape (since I’d be using several reels), and numbers for each take with space for comments like “sucks”, “passable”, “blew in-tro” and so on. This is already prepared when the musicians arr-ive.

I set up the metronome in an adjoining room with a long chord so it won’t “bleed” onto the instru-ment tracks as they’re recorded. I put a mike up close to it and turn the volume as low as possible without losing the signal on the tape. This click track is only a guide for the musicians, and won’t be part of the final mix. Remember that after the other tracks are filled, you may have to erase and record over the metronome track, since the rhythm will have been established by other musicians by then. There-fore, be careful to record the click track at a very low level, because a sharp, percussive sound doesn’t always erase cleanly, and may re-main on the track and cause prob-lems later on.

Lucia Hwong arrived. I’ve hired her to play Pipa, the Chinese equivalent to the banjo, and Cheng, similar to a Japanese Koto and the equivalent, I suppose, of the dul-cimer, only with movable bridges at intervals to determine pitch. There are some segments (usually re-ferrred to as “cues” in the biz) for which I know just what I want, and others that will require experi-mentation, and will depend on how she plays and what she can come up with on her own. Only one cue is notated. Curt Berg has notated it in the Chinese manner, which he learned during our research with Mr. Lui.

It turns out that Lucia never plays in an ensemble, only solo, and consequently her rhythm is not as tight as I need it to be. It’s difficult for her to lock into the click track rhythm and we do many takes. I try to think of ways to salvage some takes, because I’ll need to record other instruments over them and need something solid to work with. I decide after a while that I splice together some of the takes where she does lock onto the click track. It makes us both happy when I can tell Lucia we have enough to work with. She’s been working hard and hold-ing up under pressure, while I’ve tried to maintain a positive and encouraging attitude myself.

This brings up a very important point. The psychology involved in any kind of creative recording sit-uation is critical. If I had got uptight and put her down, it would not have helped her deal with a difficult situation. It may have completely paralyzed her creatively, and that was the last thing I wanted. It’s important to be positive and say things like, “You’re getting closer to it, the feeling was good, now let’s work on…”, and whatever else is true or close to being true.

You must also pay very close attention to each performance and fall back on your own creativity for alternatives if it seems what you had originally conceived is not happening. You really have to zero in on what the musicians can do in case you (or they) had overrated their talents in a particular area. In Lucia’s case, when we got to the cues involving free timing, I ex-plained what was happening on the film and its emotional import, and she was then in her element and performed beautifully.