By on November 9, 2015 in Archive Highlights, Opinions, Songmine, Songwriting Business 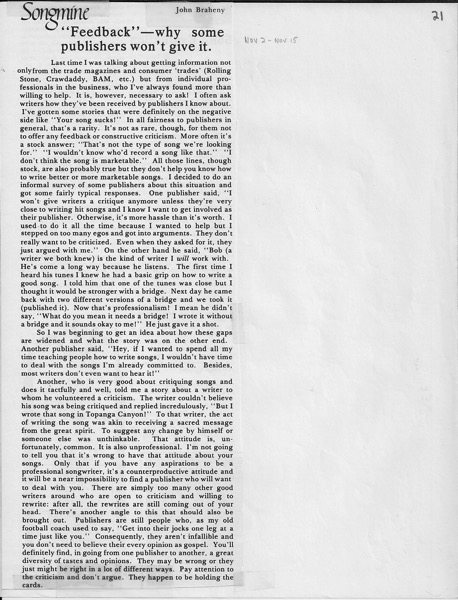 “Feedback” – why some publishers won’t give it by John Braheny

Last time I was talking about getting information not only from the trade magazines and consumer ‘trades’ (Rolling Stone, Crawdaddy, BAM, etc.) but from individual pro-fessionals in the business, who I’ve always found more than willing to help. It is, however, necessary to ask! I often ask writers how they’ve been received by publishers I know about. I’ve gotten some stories that were definitely on the negative side like “Your song sucks!” In all fairness to publishers in general, that’s a rarity. It’s not as rare, though, for them not to offer any feedback or constructive criticism. More often it’s a stock answer; “That’s not the type of song we’re looking for.” “I wouldn’t know who’d record a song like that.” “I don’t think the song is marketable.” All those lines, though stock, are also probably true but they don’t help you know how to write better or more marketable songs. I decided to do an informal survey of some publishers about this situation and got some fairly typical responses. One publisher said, “I won’t give writers a critique anymore unless they’re very close to writing hit songs and I know I want to get involved as their publisher. Otherwise, it’s more hassle than it’s worth. I used to do it all the time because I wanted to help but I stepped on too many egos and got into arguments. They don’t really want to be criticized. Even when they asked for it, they just argued with me.” On the other hand he said, “Bob (a writer we both knew) is the kind of writer I will work with. He’s come a long way because he listens. The first time I heard his tunes I knew he had a basic grip on how to write a good song. I told him that one of the tunes was close but I thought it would be stronger with a bridge. Next day he came back with two different versions of a bridge and we took it (published it). Now that’s professionalism! I mean he didn’t say, “What do you mean it needs a bridge! I wrote it without a bridge and it sounds okay to me!” He just gave it a shot.

So I was beginning to get an idea about how these gaps are widened and what the story was on the other end. Another publisher said, “Hey, if I wanted to spend all my time teaching people how to write songs, I wouldn’t have time to deal with the songs I’m already committed to. Besides, most writers don’t even want to hear it!”

Another, who is very good about critiquing songs and does it tactfully and well, told me a story about a writer to whom he volunteered a criticism. The writer couldn’t believe his song was being critiqued and replied incredulously, “But I wrote that song in Topanga Canyon!” To that writer, the act of writing the song was akin to receiving a sacred message from the great spirit. To suggest any change by himself or someone else was unthinkable. That attitude is, un-fortunately, common. It is also unprofessional. I’m not going to tell you that it’s wrong to have that attitude about your songs. Only that if you have any aspirations to be a professional songwriter, it’s a counterproductive attitude and it will be a near impossibility to find a publisher who will want to deal with you. There are simply too many other good writers around who are open to criticism and willing to rewrite: after all, the rewrites are still coming out of your head. There’s another angle to this that should also be brought out. Publishers are still people who, as my old football coach used to say, “Get into their jocks one leg at a time just like you.” Consequently, they aren’t infallible and you don’t need to believe their every opinion as gospel. You’ll definitely find, in going from one publisher to another, a great diversity of tastes and opinions. They may be wrong or they just might be right in a lot of different ways. Pay attention to the criticism and don’t argue. They happen to be holding the cards.